When my first son was little, we practiced a nightly routine for the first few years. We continued it when my daughter was born. As bedtime approached, I’d turn on the computer and play a few calming music videos that I had downloaded from YouTube. One of them was a photo collage, or a slideshow, about an American couple who adopted three brothers from Ukraine.

It was set to a song titled, “The Broken Road.” 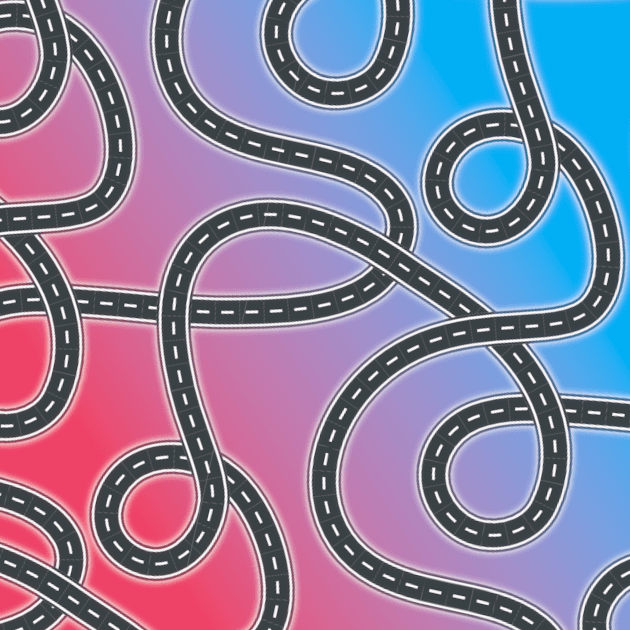 If you mapped the
course of your life,
would it look like this?

I can still picture that video, and it chokes me up. In fact, I still have it on a hard drive somewhere. Text on the screen explained that the couple had gone through quite an ordeal to find these children, win custody of them, and finally bring them back to the states.

The couple’s first application was denied. This happened because somebody had made a small error when completing the form. I didn’t understand the details, but eventually they received short notice that some boys were waiting for their new parents. As the musical accompaniment played, it explained that, “God blessed the broken road that led me straight to you.”

As if in a movie, three beautiful little sisters (and their mother) were waiting for their daddy and their new brothers at an airport somewhere in the good ol’ US of A. The music’s crescendo came just as pictures showed the joyful reunion of husband with wife, parents with kids, and of the new brothers with their three smiling sisters.

What a sense of relief and amazement and gratitude they must have felt at that final moment in the video.

The road was hard. Sometimes, it was confusing. It cost more time and effort (and money, no doubt) than the family had expected at the outset. Yet, God was with them, and He took them along that road for His good reasons.

“As for me, the Lord has guided me in the way…”

Here, as I write my first post on 4LPress.com, I feel that. I starting writing, with the intention of publishing the works, almost fifteen years ago. Gradually, parental and financial responsibilities squeezed out other interests. So I’ve been precluded from realizing that dream.

If you looked in my computer files, you’d see collections of notes about books I want to write, and books that I began to write but have not completed.

Meanwhile, though, God has given me a family and a home, and He has blessed most of the things I’ve put my hand to. So I don’t want any of that time back, except to live it again the same way. However, I am so grateful and excited to have reached the point where this dream can be realized, finally.

I would describe the first half of my life as a broken road. The second half has been more of a winding road. Maybe I can’t walk straight, and He has been gracious and faithful to work anyway. And maybe that’s just how God’s plan looks to us sometimes.

Consider Noah, who worked for a hundred years, building a huge ship, before it began to rain.

Consider Abraham, whom God promised a son in his old age, long before Sarah bore Isaac.

Consider David, who was anointed as the future king, when he was just a shepherd boy, years before anybody placed a crown on his head.

Though outsiders may look at my road and see chaos or randomness, I see God’s hand at work. Truly, the Lord is my Shepherd, as Psalm 23 assures us. He is an exceedingly faithful Shepherd, and I am a very fortunate sheep to be in His fold.

If you are working toward a goal the Lord has given you, keep at it. Don’t let the bumps or curves discourage you. God is using them and bringing you where you ought to be. As I’ve told my kids numerous times: everything worth having is worth working for, and the amount of satisfaction you will feel later is in direct proportion to the difficulty and duration of the challenge you face now.

What’s your broken or winding road? What have you learned? What are you learning? For that matter, do you or did you have any neat family routines? Tell us in the comments!

Get News, Reviews & Posts too!

*This is a weekly newsletter. We promise not to SPAM you.